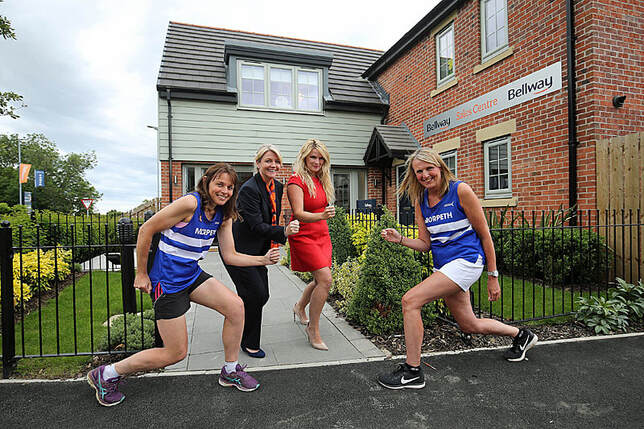 Morpeth Harriers & Athletics Club is delighted to announce that national house builder
Bellway is to be the headline sponsor of this year’s Morpeth 10k road race.
The annual event will take place on Tuesday, 6th August, at 7.30pm.
The Bellway Morpeth 10k will follow the traditional two-circuit route around Tranwell Woods to the south west of the town.

Morpeth Harriers chairman David Swinburne said securing the support
of a prestigious sponsor such as Bellway was a major accolade for the club.
“We are very grateful to Bellway for their support which will allow us to
promote the race better and, hopefully, increase participation from residents of Morpeth and beyond.
“Bellway has invested a tremendous amount into Morpeth in recent years with several key developments in and around the town.
“Their decision to sponsor this race shows they are investing in the community
in every sense and we are really delighted to have them on board.”

Bellway North East is currently building three, four and five-bedroom homes at Collingwood Manor in Loansdean
and four-bedroom homes at Taylors Wynd in Hepscott, which are both situated to the south of Morpeth.

One and two-bedroom apartments, as well as three and four-bedroom townhouses,
are also available at Stannington Mews to the south-west of Morpeth.

Emma Chesterton, Head of Sales for Bellway North East, said:
“We’re delighted to support the Morpeth 10k road race,
which is such a fantastic annual event bringing the whole community together.
“At Bellway, we’re very aware of the importance of investing in the communities in which we build,
which benefits people who may have lived here for many years,
as well as helping our own new residents discover their local area and make new friends.”

This year the race will be licensed by Run Britain for the first time,
meaning that competitors’ times are included on the Power of 10 website.

Alongside headline sponsor Bellway, the event is also being supported by Coca-Cola Enterprises,
which will supply its Morpeth-manufactured Glaceau Smartwater to competitors during and at the end of the race.

Race parking is only available at the Piramal factory on Whalton Road (NE61 3YA).
Race numbers should be collected on the day from 5pm to 7.15pm
from race headquarters at Morpeth Town Football Club.
Minimum age for entry is 15 on the day of the race.
2018 Morpeth 10k Results
2017 Morpeth 10k Results